A cable television is planning on airing a live exorcism in the same Saint Louis home where in 1949 Jesuits performed the famous exorcism that inspired the move “The Exorcist”. This program has drawn condemnation and a dire warning from the Archdiocese of Saint Louis.

The program titled “Exorcism: Live!” produced for the cable channel Destination America will take place at a home in Bel Nor, a suburb of Saint Louis, the site of perhaps the most famous exorcism in modern history.

At the home in 1949, Jesuit priests from Saint Louis University performed an exorcism on a 14-year-old boy known by the pseudonym “Roland Doe”. Doe became inexplicably and violently ill, screaming in languages he was never taught, with doctors unable to figure out what was wrong. Eventually, religious leaders decided that Doe was possessed by the Devil. Through the Rite of Exorcism, a Jesuit Catholic priest freed Doe of his demons.

The famous book and movie, “The Exorcist”, is based on the extraordinary events that happened here.

The most shocking details came straight from the diary of one of the SLU Jesuits involved. The diary describes the boy’s bed shaking violently, and mysterious scratch marks that appeared to spell words on the boy’s body.

“Many of the things you see in that movie (‘The Exorcist’),” said SLU archivist John Waide. “Evidently things like that or almost like that did happen.”

The “exorcism” will be performed by Bishop James Long, who is NOT a Catholic bishop, but instead an Archbishop of the United States Old Catholic Church, which is not affiliated with the Vatican.

The local Archbishop, the Most Reverend Robert J. Carlson has warned against this event in a statement saying “Any attempt to use the solemn Rite of Exorcism as entertainment exposes all participators to the danger of future hidden satanic attack.”

The cable network “Destination America” reportedly plans to air a purported exorcism live on national television on Friday, October 30, from a home in St. Louis which was associated with the well-known exorcism of “Roland Doe” in 1949.

Given the public nature of this event, the Archdiocese of St. Louis – which is not involved in this dangerous endeavor – deems it necessary to educate and warn the public about the dangers of participating in such activities.

“No exorcism can take place without the authority of the local Roman Catholic ordinary,” said auxiliary bishop emeritus Robert Hermann.

Most Reverend Robert J. Carlson, Archbishop of St. Louis, has not granted the necessary permissions – known as “faculties” – to any priests or bishops for the purpose of this televised event. Anyone involved in this production who claims to be a member of the Catholic clergy is not affiliated with the Archdiocese of St. Louis nor are they operating under the authority of the Vatican.

Any purported exorcism by spiritualists, paranormal investigators, mediums, or non-Catholic clerics for the purposes of entertainment trivializes this ancient rite of the Roman Catholic Church and the very real danger of evil.

“Any attempt to use the solemn Rite of Exorcism as entertainment exposes all participators to the danger of future hidden satanic attack,” said Bishop Hermann. “We cannot play games with Satan and expect to win.” 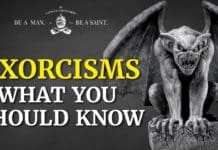