Spotting a colorful ladybug is a sure sign that the cold of winter is gone and the warmth of summer has been ushered in. Farmers and gardeners alike love the insect for keeping away pests that eat their plants. Having one land on you even means good luck in popular folklore. But have you ever wondered just how the tiny beetle got its name? It might surprise you that the ladybug actually takes its name after the Blessed Virgin Mary.

Humanity’s agricultural endeavors have long been intertwined symbiotically with insects and other creatures that protect crops. While today ladybugs are often used as organic pest control for home gardeners and farmers, hundreds of year ago before the advent of pesticides they were often depended upon to safeguard the harvests.

“Locusts came, grasshoppers without number. They devoured every plant in the land; they devoured the crops of their fields.” – Psalms 105:34-35

As tradition goes, during the Middle Ages a plague of small insects, most likely aphids, attacked the crops and threatened Europe with starvation. The people turned to praying for the intercession of the Virgin Mary. Their prayers were answered when a cloud of tiny orange-red insects speckled with black arrived and ate the offending pests. In gratitude, the people gave them the honorary name “Our Lady’s Beetle.” Over time, this was shortened to the “ladybeetle” or the “ladybird,” and in the United States became what we know today as the ladybug.

Another tradition finds the ladybugs name in its bright red shell that bears a striking resemblance to the red cloak the Virgin Mary is often wearing in religious paintings from the time. In Europe, the most common ladybug is the seven-spotted variety. These seven spots were seen to symbolize both the Seven Joys and Seven Sorrows of Mary.

Its likely that both traditions somewhat contributed to giving the ladybug its name. However, what is definitive is that almost all European countries during the Middle Ages believed them to be a gift from God. Of the variety of names given to the beetle, a majority of them refer to Our Lady.

Not convinced enough? According to the Oxford Dictionary, the first mention of the “ladybird” comes from a 1674 glossary of southern English words. The author of the glossary says “the little spotted beetle commonly called the Lady cow, or Lady-bird” is referred to in slang as a “bishop.” There is no doubting the strong relationship the ladybug had with medieval Europe’s religiosity. 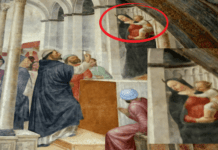