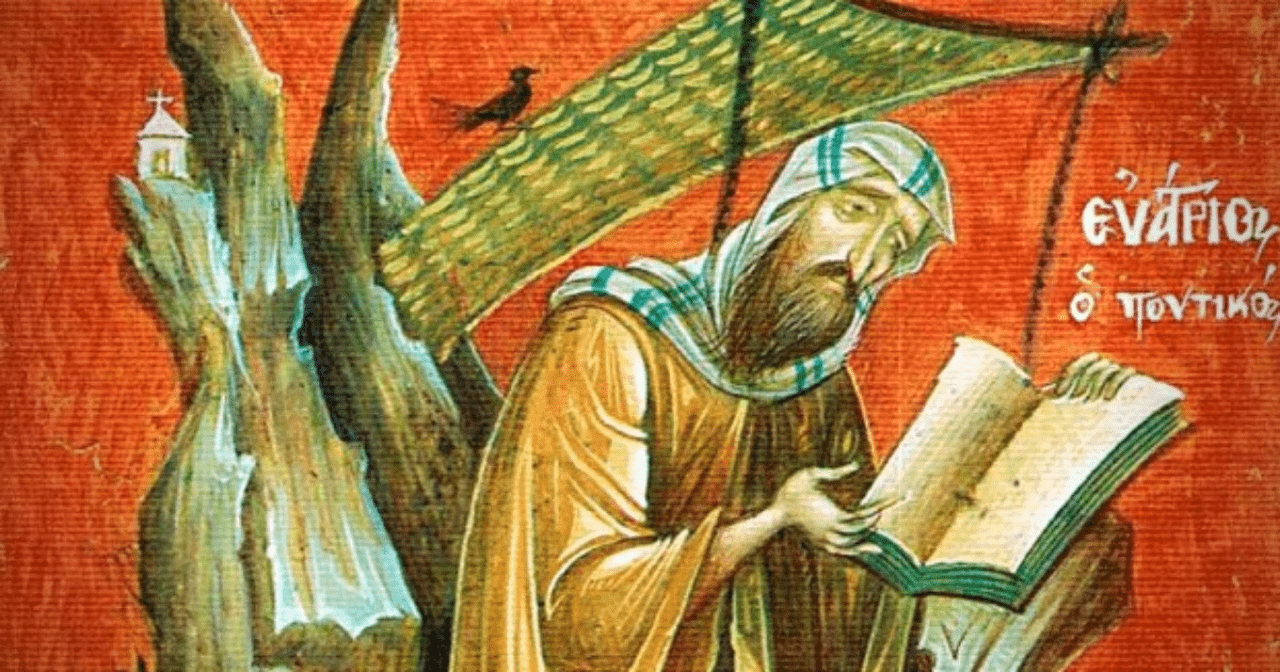 Allow me to introduce you to one of the most fascinating men of the early Church: Evagrius—sometimes referred to as Evagrius Ponticus or Evagrius the Solitary.

Evagrius was born to a Christian family around 345 in the humble town of Ibora within the Roman province of Pontus. He was a highly educated man who was quickly recognized for his intellectual brilliance and oratorical skill. St. Basil the Great took a strong liking to him, and elevated him to minor orders as a “reader”. Then in 380 St. Basil’s cousin, St. Gregory Nazianzus, invited Evagrius to Constantinople. There St. Gregory ordained Evagrius as deacon, and he remained in Constantinople even after Gregory left the next year. He was later elevated to “archdeacon” of Constantinople and was present at the Second Ecumenical Council held in Constantinople later in 381.

As one might expect, the pomp and splendor of the city, coupled with all the honors and recognition he’d been receiving as a scholar and clergyman began to go to Evagrius’ head. He developed a love for feasting, and even had several slaves to wait on him. Eventually he fell in love with a married noblewoman.

Evagrius had the good sense to fight off his infatuation with the noblewoman, but by the time he’d overcome his passion, she’d fallen in love with him—showering him with a great deal of money and other presents.

The situation disturbed Evagrius greatly, but he was at a loss for what to do. Then one night he had a dream in which he found himself in prison. An angel appeared to him and asked, “Evagrius, what are you doing in this prison?”

“Would you like to get out,” the angel asked?

“Very much so! I am most unhappy here.”

“Then you must swear on the Gospels that you will leave the city.”

Evagrius swore that he would leave Constantinople at the first possible moment. With that the dream ended. When he awoke, he was relieved to discover that it was only a dream. But despite that, Evagrius recognized that he’d sworn on the Gospels to leave Constantinople. So spent that day setting his household in order, then fled the next day to Jerusalem.

He became a monk in 383 out of obedience to St. Melania the Elder, and in 385 he went to the mountain of Nitria in Egypt where he lived for several years before moving to the Cells, deep in the heart of the Nitrian desert. There he ended his days in prayer and fasting, providing for his meagre needs by writing.

It was in the Nitrian desert that young monks also began to flock to him for spiritual council and guidance in the monastic life.

So why have I bothered introducing you to this little-known monk who died ages ago in the heart of the Egyptian desert?

Why do I say “indirectly”?

One of the most notable disciples of Evagrius was St. John Cassian. You may have heard of him. Cassian is the author of two notable books—the Institutes of the Coenobia and the Conferences of the Desert Fathers. It was through these two books that Cassian brought what he’d learned from the Egyptian hermits—particularly his mentor Evagrius—to the Church of Rome.

Let’s use one teaching in particular to illustrate this.

Cassian inherited Evagrius’ teaching on the eight “thoughts” or “passions” that are the roots of all other sins: gluttony, lust, greed, sadness, despondency, anger, vainglory, and pride.

When Pope St. Gregory the Great read of these eight passions in Cassian’s Conferences, he adapted them slightly, combining sadness and despondency under the heading “sloth.” It’s from here that the West receives its tradition of the Seven Deadly Sins!

But the list wouldn’t be complete without this last heavy-hitter. In treating the vices in the Summa Theologiae, even St. Thomas Aquinas himself drew heavily from the works of Cassian—which means even he was under the indirect influence of Evagrius.

Now it should be pretty clear why Vatican II and Pope St. John Paul II were so insistent that “from their very origins, the churches of the east have had a treasury from which the church of the west has drawn.”