Greenbacks, bucks, moola, dough, bacon. All are slang terms for something we use so often in our everyday lives that we’ve become complacent, and the thought has probably never crossed our minds how more than twenty nations across the world have come to call their currency “the dollar”. Most don’t know the origin of the name dollar actually comes from the father of Mary, and Christ’s maternal grandfather, Saint Joachim.

Understanding how the dollar is named after Saint Joachim requires the context of the economic situation of late 15th century Europe. Almost all currency in Europe was heavily devalued, both from continuous wars across the continent and the one-sided trade of precious metals to the Far East in return for spices and silk. This meant European currency was quite poor, with very little precious metal content.

Enter the town of Joachimsthal in the Kingdom of Bohemia, modern-day Czech Republic, named after Saint Joachim. At a time when most of Europe was lacking in precious metals, rich silver mines were discovered in the town. Hieronymus Schlick was the Bohemian count of the town that directed the formal minting of new coins using the silver from the mines. These coins featured Saint Joachim on one side and a lion on the other and were first minted in 1518. 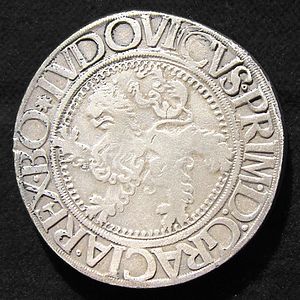 William Lyman Fawcett tells in his 1879 book Gold and Debt; an American Handbook of Finance these newly minted coins were

“of uniform weight and fineness and because traders of the time were in want of some international standard, these coins soon became in good repute all over Europe under the names of Schlicken thalers or Joachim’s thalers” – William Lyman Fawcett

Eventually, the name Joachimsthaler was gradually shortened to the German taler, and from there the daler. By the middle of the 16th century, the English language had adopted the German word into its vocabulary as “the dollar”: a term to describe various forms of coinage across Europe, with its roots in the name of Saint Joachim.

Citizens of Europe over 400 years ago knew the value one Joachimsthaler had because of its uniformity and precious metal content. Today, people think a meager dollar has little value, however this couldn’t be further from the truth. Just one dollar has the ability to make an impact and difference through a donation to various Church mission projects through MISSIO from the Pontifical Mission Societies.

With MISSIO you can directly support (with only one dollar, or more!) the works of Catholic missionaries in the poorest and most desperate areas of the world. Just some of the giving opportunities on MISSIO include helping to protect girls living on the streets of rural India, support an Intensive Care Unit in a rural Kenyan hospital, or send general support for the Pope’s missions around the world.

Start a new year right – putting just one dollar to work with MISSIO!