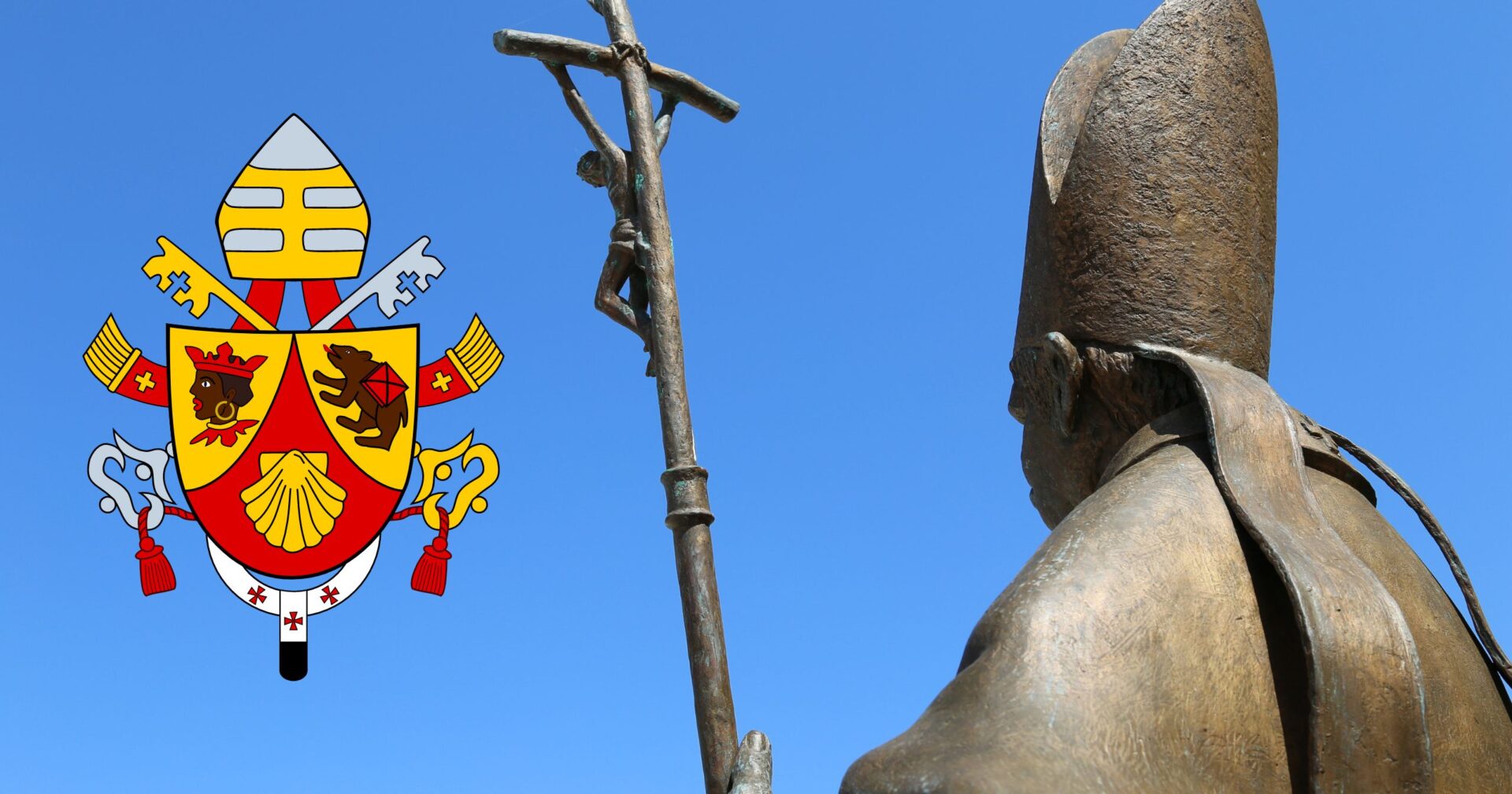 Pope Benedict XVI’s official coat of arms is more than just an emblem or symbol – it’s a visual representation of the pontiff’s personal history, beliefs, and values.

The various elements featured on the coat of arms all hold special significance and tell a unique story.

Explore the meaning behind each element of Pope Benedict XVI’s coat of arms and how they contribute to the overall design.

You might be surprised by the depth of symbolism and significance found in this official emblem!

The blazon, or written description of the coat of arms, is given on the Vatican website as follows:

“A red shield mantled in gold and with a gold scallop shell; the right (for the bearer of the shield, the left for the viewer) part of the mantle has the head of a moor in her natural colour (brown) wearing a red crown and red collar; the left part of the mantle has a walking bear in its natural colour (brown) carrying a red pack tied with black bands.”

The scallop shell is a symbol with multiple meanings.

It is said to represent the unfathomable mystery of the Holy Trinity, as Saint Augustine once meditated on the subject while walking along the seashore. A boy was using a shell to pour sea water into a hole, and when Augustine asked him what he was doing, the boy replied, “I am emptying the sea into this hole.” This helped Augustine understand that man would never fully understand the mystery of God. As Joseph Ratzinger, Benedict XVI wrote his dissertation on The People of God and the House of God in Augustine’s Teaching. The shell therefore holds a personal connection to his thoughts on the Church.

The scallop shell is also an allusion to the Sacrament of Holy Baptism. Traditionally, a sea shell was often used to pour water over the head of the child being baptized. Thus, the shell is a symbol of this important rite in the Christian life.

The shell is also a symbol of pilgrimage. When placed on top of a pilgrim’s staff, or “Jacob’s staff”, it becomes the sign of a pilgrim. In Church art, it is a symbol of the apostle Saint James the Great and his sanctuary at Santiago de Compostela in Spain, which was a major place of pilgrimage during the Middle Ages. This symbol also alludes to “the pilgrim people of God”, a title for the Church which Pope Benedict championed at the Second Vatican Council as a theological advisor. When he became Archbishop, Pope Benedict took the shell in his coat of arms as a reference to this idea. It is also found in the insignia of the Schottenkloster in Regensburg, where the major seminary of that diocese is located, a place where Pope Benedict taught as a professor of theology.

Finally, the pilgrimage symbolism of the shell may also refer both to the reconfigured role of the pope as not only ruler, but also pilgrim among the peoples and nations of the world. Pope Paul VI, who created Pope Benedict as a cardinal in 1977, was often called the “Pilgrim Pope” for his ground-breaking travels to various countries. This precedent was greatly elaborated upon by Pope John Paul II with his historic trips, numbering over a hundred. Pope Benedict also made numerous trips during his papacy, further emphasizing the idea of the pope as a pilgrim.

The left side of the mantle features a brown bear trippant, carrying a red pack tied with black bands. This bear represents Pope Benedict’s trust in God and his calling to spread the faith to others. It is also a reference to Saint Corbinian, who is said to have tamed a bear that had killed his pack horse and made it carry his bags on its back.

Overall, Pope Benedict’s coat of arms is a beautiful and symbolic representation of his personal history, beliefs, and values.

The various elements, including the scallop shell, moor’s head, and Corbinian’s bear, all hold special meaning and tell a beautiful story representative of his amazing pontificate.