Distinctly absent from the four Gospels or any book of the New Testament are descriptions of Jesus in any detail. Nevertheless, Catholic tradition has depicted Him in many forms throughout history. Here are some of the oldest surviving images of Jesus Christ.

Also known as the blasphemous graffito, this uncharitable depiction of Jesus Christ might be oldest in existence, estimated to have been made circa 200 A.D. An engraving found on a plaster wall in Rome, it depicts a donkey-head crucified figure being worshiped with the caption “Alexamenos worshiping his god,” presumably mocking the man’s Christian faith.

The Healing of the Paralytic

A wall painting dating around the year 235 A.D., it was found in 1921 on the wall of a baptismal chamber in a house church at Dura Europos on the Euphrates River in Syria. It tells the story of Christ’s miracle in healing the paralyzed man.

Adoration of the Magi

Found incised on a sarcophagus slab within the catacombs of Rome, this depiction of the Magi adoring the Christ Child dates back to the early third century.

Featuring a familiar motif, this painting from the third century was found in the Saint Callisto catacomb in Rome and depicts Christ as the Good Shepherd who gives his life for his sheep. 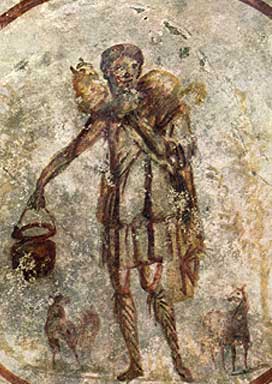