Common to Catalonian Nativity scenes is el caganer, literally meaning ‘the pooper’ – a figurine depicted in the act of defecation.

Traditionally, el caganer is a peasant wearing the Catalan red cap known as a barretina with his pants down and backside exposed. While it’s exact origin is unknown, the tradition has existed since at least the 18th century.

In Catalonia and neighboring areas with Catalonian culture like Andorra, Valencia, and even parts of Southern France, nativity scenes often consist of a model of the entire city of Bethlehem, not just your usual manger scene seen in most English speaking countries.

The entire model is known as the pessebre, a recreation of a pastoral scene:

“A traditional Catalan masia (farmhouse) as the central setting with the child in a manger, and outlying scenes including a washerwoman by a river, a woman spinning, shepherds herding their sheep or walking towards the manger with gifts, the Three Wise Men approaching on camel back, a scene with the angel and shepherds, the star pointing the way, etc. Commonly materials such as moss will be used to represent grass, with cork used to represent mountains or cliffs.”

The caganer is seen by many as an “essential piece and the most popular figure of the nativity scene.” It accompanies Mary, Joseph, Jesus, the shepherds, and company – often tucked away in the corner of the scene, nowhere near the manger.

Why is a man defecating a key figure in a scene considered holy?

One commonly accepted explanation as to the origin of the tradition is “because people believed that this deposit symbolically fertilized the ground of the nativity scenes, which became fertile and ensured the nativity scene for the following year, and with it, the health of body and peace of mind required to make the nativity scene, with the joy and happiness brought by Christmas near the hearth. Placing this figurine in the nativity scene brought good luck and joy and not doing so brought adversity.”

Including the caganer in a nativity scene is a practice tolerated by the Church, especially in the areas where it is historically popular. 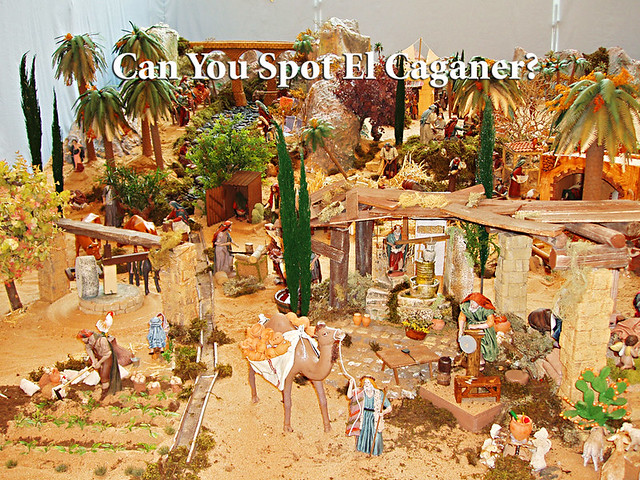 Solemnity of the Epiphany of Our Lord Is This the Same Manger That Jesus Was Placed In?