The Diocese of Brooklyn released a video showing a man interrupting Mass and desecrating the altar by pouring juice on it.

Last Sunday during the 9:30 a.m. Mass at Saint Anthony of Padua Church in Greenpoint, Brooklyn, a man approached the altar and poured juice on it before the consecration, staining the altar cloth and the priests vestments. The Diocese of Brooklyn called the act a “heinous act of religious intolerance” and a “desecration.”

Father Jossy Vattothu is a member of the Carmelites of Mary Immaculate and was celebrating Mass that morning. He said during his ten years of being a priest, he had never seen anything like it.

“During my years as a priest, nothing like this has ever happened. At first, as he approached the altar, I thought he had something to tell me. It is a miracle that the bread and wine were not damaged, and I was able to continue the Mass, consecrating the bread and wine into the body and blood of Jesus Christ.”

The man was detained by the parishioners present and promptly arrested by NYPD’s 94th precinct, taken to a nearby hospital for a psychiatric evaluation. Vattothu said he is praying for the man, and for those who helped console him after Mass.

“I pray for this person and do not know what was going through his mind. I am grateful for the parishioners who were so caring and consoled me after Mass. I would urge Catholics who attend mass to sit closer to the altar so that we as a faith community can be more together and make the priest feel more comfortable.”

Monsignor Anthony Hernandez, Chancellor of the Diocese of Brooklyn, said given the current climate of anti-Catholic acts, the event is just another reason as to why people are afraid to go to their church.

“It’s really egregious that somebody would do that at the most sacred part of the Catholic Mass, which is the consecration. I think right now, people are scared given the current environment of anti-Semitic and anti-Catholic incidents. People are afraid to go to their house of worship.”

Watch the footage released by the Diocese of Brooklyn below: 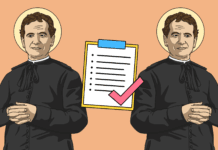