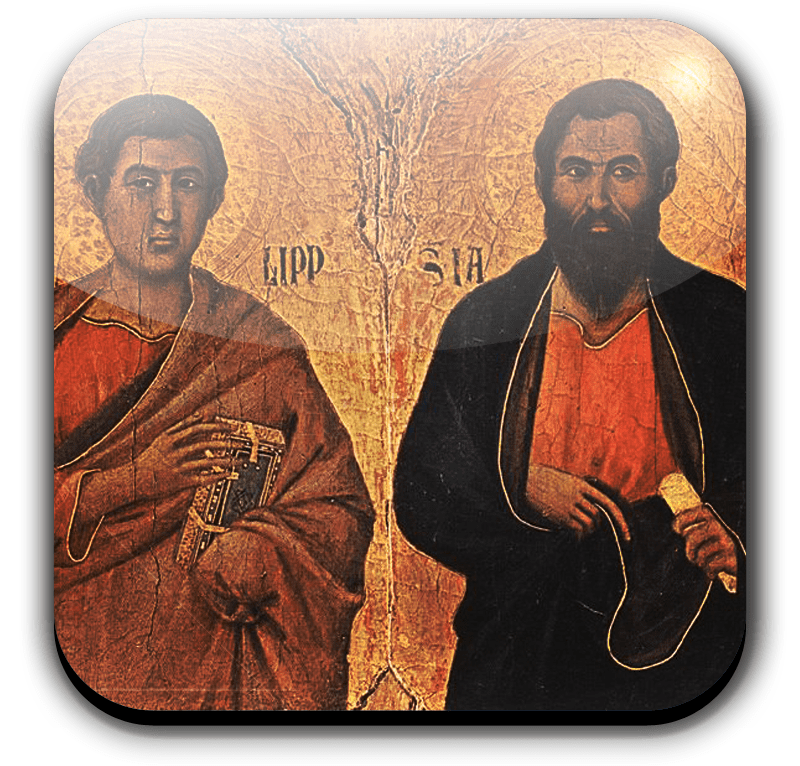 Philip was one of the first chosen disciples of Christ. On the way from Judea to Galilee Our Lord found Philip, and said, “Follow Me.” Philip straightway obeyed; and then in his zeal and charity sought to win Nathaniel also, saying, “We have found Him of whom Moses and the prophets wrote, Jesus of Nazareth.” And when Nathaniel in wonder asked, “Can any good come out of Nazareth?” Philip simply answered, “Come and see,” and brought him to Jesus.

Another saying of this Apostle is preserved for us by Saint John. Christ in His last discourse had spoken of His Father; and Philip exclaimed, in the fervor of his thirst for God, “Lord, show us the Father, and it is enough!” The tradition of the ancients has established that he died a martyr at Hierapolis in Phyrgia. There the remains of a church known to be dedicated to him have been identified, north of the entrance to the great necropolis. His relics were later transported to Rome, to the church of the Holy Apostles.

Saint James the Less (the Younger), author of the canonical Epistle, was the son of Alpheus, the brother of Saint Jude and a cousin of Our Lord, whom he is said to have resembled. Saint Paul tells us that he was favored by a special apparition of Christ after the Resurrection. (I Corinthians 15:7) On the dispersion of the Apostles among the nations, Saint James remained as Bishop of Jerusalem, where the Jews held in such high veneration his purity, mortification, and prayer, that they named him the Just. He governed that church for 30 years before his martyrdom.

Hegesippus, the earliest of the Church’s historians, has handed down many traditions of Saint James’s sanctity. Saint James was a celibate Nazarite consecrated to God; he drank no wine and wore no sandals. He prostrated himself so long and so often in prayer that the skin of his knees was hardened like a camel’s hoof. It is said that the Jews, out of respect, used to touch the hem of his garment.

He was indeed a living proof of his own words, “The wisdom that is from above is first of all chaste, then peaceable, modest, ready to listen, full of mercy and good fruits.” (James 3:17) He sat beside Saint Peter and Saint Paul at the Council of Jerusalem. When Saint Paul at a later time escaped the fury of the Jews by appealing to Caesar, the people took vengeance on James, and crying out, “The just one has erred!” stoned him to death. During his martyrdom he prayed for his persecutors in the same words pronounced by Jesus: “Heavenly Father, forgive them, they know not what they do.”