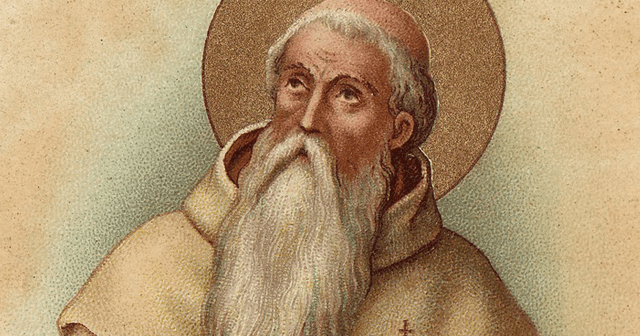 Saint Berthold seems to have had a connection with the beginnings of the Carmelite Order. He was a relative of Aymeric, the Latin patriarch of Antioch who was installed in Antioch during the crusades. At the time, there were a number of hermits from the West scattered throughout Palestine, and Berthold gathered them together, founded a community of priests who settled on Mount Carmel, and became their first superior.

There is a legend that he was born at Limoges in France, studied in Paris, and was ordained a priest there. According to the legend, he accompanied Aymeric on the crusades and found himself in Antioch when it was being besieged by the Saracens. Through his urgings, the Christians in Antioch turned to prayer and penance, and the city was delivered.

What is known for certain is that St. Berthold directed the building of a monastery and church on Mount Carmel and dedicated the church in honor of the prophet Elias, who had defeated the priests of Baal there and seen the vision of the cloud out over the sea. This is confirmed in a letter of Peter Emilianus to King Edward I of England in 1282.

Berthold lived out his days on Mount Carmel, ruling the community he had founded for forty-five years until his death about 1195. His example and way of life stamped the beginnings of the Carmelite Order, leading to the drawing up of the order’s rule by St. Albert, Latin patriarch of Jerusalem, about 1210. That rule was approved by Pope Honorius III in 1226 and it is this primitive rule that is considered the foundation of the Order of Mount Carmel.

But it seems to have been Berthold who first organized the monastic life of the hermits on Mount Carmel and governed them until his death. St. Brocard, who apparently was his successor, petitioned Albert to compose a rule for them, undoubtedly codifying and completing the work begun by Berthold.