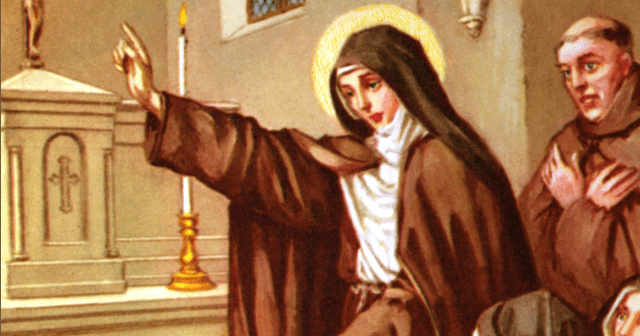 Saint Colette (1381-1447) was the daughter of a carpenter named DeBoilet at Corby Abbey in Picardy, France.  Orphaned at seventeen, she distributed her inheritance to the poor. She became a Franciscan tertiary, and lived at Corby as a solitary.

She had visions in which Saint Francis of Assisi ordered her to restore the Rule of Saint Clare to its original severity. When she hesitated, she was struck blind for three days and mute for three more; she saw this as a sign to take action.

Colette tried to follow her mission by explaining it, but had no success. Realizing she needed more authority behind her words, she walked to Nice, France, barefoot and clothed in a habit of patches, to meet Peter de Luna, acknowledged by the French as the schismatic Pope Benedict XIII. He professed her a Poor Clare, and was so impressed that he made her superioress of all convents of Minoresses that she might reform or found, and a missioner to Franciscan friars and tertiaries.

She travelled from convent to convent, meeting opposition, abuse, slander, and was even accused of sorcery. Eventually she made some progress, especially in Savoy, where her reform gained sympathizers and recruits. This reform passed to Burgundy in France, Flanders in Belgium and Spain.

Colette helped Saint Vincent Ferrer heal the papal schism. She founded seventeen convents; one branch of the Poor Clares is still known as the Colettines.

She was known for a deep devotion to Christ’s Passion with an appreciation and care for animals. Colette fasted every Friday, meditating on the Passion. After receiving Holy Communion, she would fall into ecstasies for hours. She foretold the date of her own death.

For the convents reformed by her she prescribed extreme poverty, to go barefooted, and the observance of perpetual fast and abstinence. The Colettine Sisters are found today, outside of France, in Belgium, Germany, Spain, England, and the United States. St. Colette was beatified 23 January, 1740, and canonized 24 May, 1807.