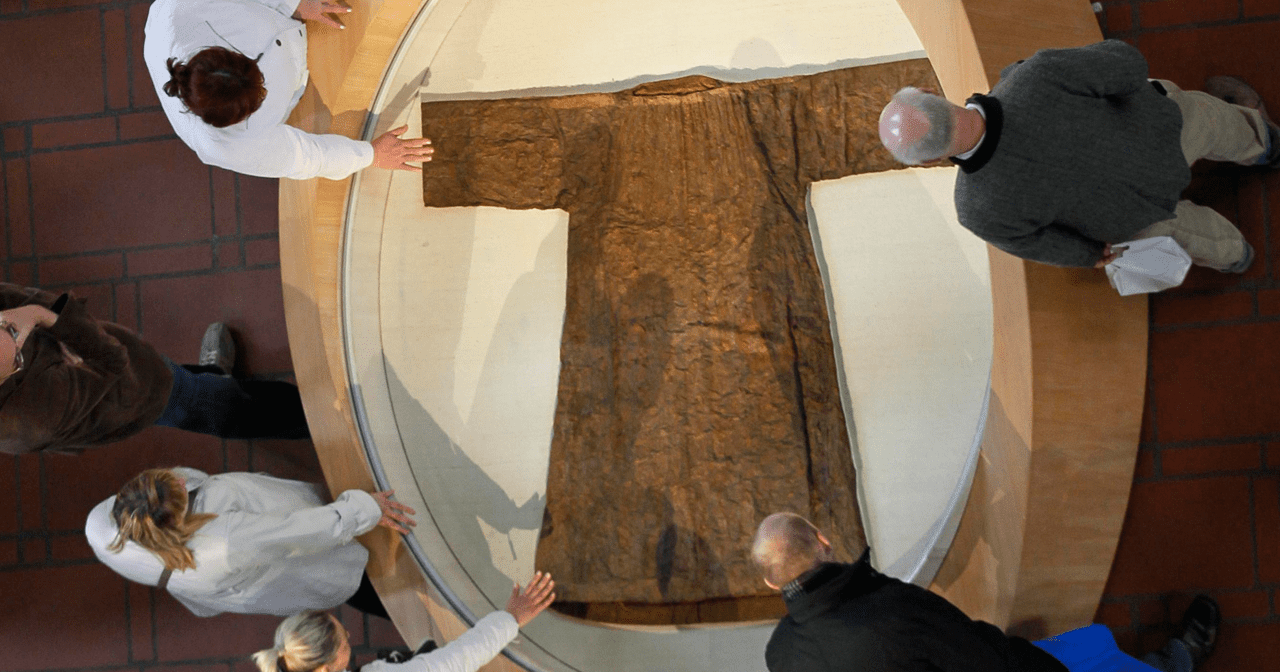 Although a majority have been lost to history, some of the earliest relics of the Church still survive to this day. Of the surviving artifacts, those associated with Jesus Christ Himself have been most studied and fascinating of them of all.

Some of these include the Holy Sponge, True Cross, Holy Robe, Holy Lance, and Holy Prepuce, the Virgin’s Girdle, and the Holy Robe of Jesus Christ, reported to be the robe worn by Jesus shortly before His crucifixion. What remains of it, and where is it located today?

According to the Gospel of John, the clothing of Our Lord was divided into four pieces by the Roman soldiers that had crucified Him. However, because His robe was woven in one piece of fabric without seams, they cast lots to determine its ownership, so as not to divide it.

“When the soldiers had crucified Jesus, they took his clothes and divided them into four shares, a share for each soldier. They also took his tunic, but the tunic was seamless, woven in one piece from the top down. So they said to one another, ‘Let’s not tear it, but cast lots for it to see whose it will be,’ in order that the passage of scripture might be fulfilled [that says] ‘They divided my garments among them, and for my vesture they cast lots.’ – John 19:23-24

According to tradition, Saint Helena discovered the Holy Robe around the year 328 along with other relics, including the True Cross. In distributing the relics she had unearthed, she bequeathed the Holy Robe to the Diocese of Trier located in Trier, Germany. Not much is known about the history of the Seamless Robe until the 12th century, when Archbishop John I of Trier had the altar containing the Robe consecrated. Throughout its history, it has had pieces of silk sewn to the cloth, and in the 19th century was coated in a rubber solution in efforts to preserve it.

Typically it is held folded in a reliquary, not available for direct viewing. However, in 1512 Emperor Maximilian I demanded to view the Holy Robe, kept in the High Cathedral of Saint Peter in Trier. The Archbishop Richard von Greiffenklau zu Vollrads arranged for the original consecrated altar to be opened. The locals of Trier heard of this, and also demanded to view the Holy Robe. After the original opening of the altar in 1512, irregular pilgrimages to Trier took place throughout history.

The last viewing of the Holy Robe took place in 2012, with over half a million making the pilgrimage to see it. In speaking about the Holy Robe and its authenticity, Pope Emeritus Benedict XVI said “This relic makes present the final dramatic moments of the earthly life of Jesus: His death on the cross.” Of the seamless and whole nature of the Holy Robe, Pope Emeritus Benedict XVI said it reflects on the ‘the unity of the Church’ and its ‘unique and indivisible community.”