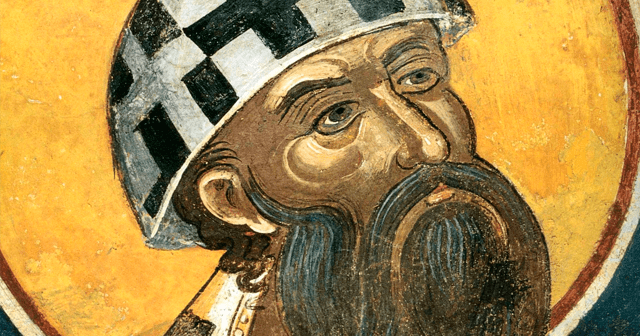 Saint Cyril was born at Alexandria, Egypt. He was nephew of the patriarch of that city, Theophilus. Cyril received a classical and theological education at Alexandria and was ordained by his uncle. He accompanied Theophilus to Constantinople in 403 and was present at the Synod of the Oak that deposed John Chrysostom, whom he believed guilty of the charges against him.

He succeeded his uncle Theophilus as patriarch of Alexandria on Theophilus’ death in 412, but only after a riot between Cyril’s supporters and the followers of his rival Timotheus. Cyril at once began a series of attacks against the Novatians, whose churches he closed; the Jews, whom he drove from the city; and governor Orestes, with whom he disagreed about some of his actions.

In 430 Cyril became embroiled with Nestorius, patriarch of Constantinople, who was preaching that Mary was not the Mother of God since Christ was Divine and not human, and consequently she should not have the word theotokos (God-bearer) applied to her. He persuaded Pope Celestine I to convoke a synod at Rome, which condemned Nestorius, and then did the same at his own synod in Alexandria. Celestine directed Cyril to depose Nestorius, and in 431, Cyril presided over the third General Council at Ephesus, attended by some two hundred bishops, which condemned all the tenets of Nestorius and his followers before the arrival of Archbishop John of Antioch and forty-two followers who believed Nestorius was innocent.

When they found what had been done, they held a council of their own and deposed Cyril. Emperor Theodosius II arrested both Cyril and Nestorius but released Cyril on the arrival of Papal Legates who confirmed the council’s actions against Nestorius and declared Cyril innocent of all charges. Two years later, Archbishop John, representing the moderate Antiochene bishops, and Cyril reached an agreement and joined in the condemnation, and Nestorius was forced into exile.

During the rest of his life, Cyril wrote treatises that clarified the doctrines of the Trinity and the Incarnation and that helped prevent Nestorianism and Pelagianism from taking long-term deep root in the Christian community. He was the most brilliant theologian of the Alexandrian tradition. His writings are characterized by accurate thinking, precise exposition, and great reasoning skills. Among his writings are commentaries on John, Luke, and the Pentateuch, treatises on dogmatic theology, and Apologia against Julian the Apostate, and letters and sermons.

He was declared a doctor of the Church by Pope Leo XIII in 1882.