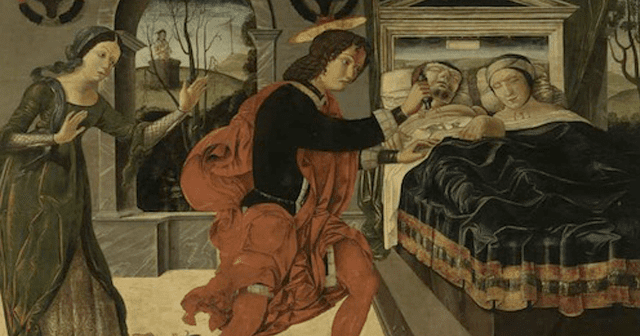 According to a pious legend that was very popular in the Middle Ages, Saint Julian was of noble birth and while hunting one day, was reproached by a hart for hunting him and told that he would one day kill his mother and father.

He was richly rewarded for his services by a king and married a widow. While he was away his mother and father arrived at his castle seeking him; When his wife realized who they were, she put them up for the night in the master’s bed room. When St. Julian returned unexpectedly later that night and saw a man and a woman in his bed, he suspected the worst and killed them both. When his wife returned from church and he found he had killed his parents, he was overcome with remorse and fled the castle, resolved to do a fitting penance.

He was joined by his wife and they built an inn for travelers near a wide river, and a hospital for the poor. He was forgiven for his crime when he gave help to a leper in his own bed; the leper turned out to be a angel from God who had been sent to test him. He is the patron of hotel keepers, travelers, and boatmen. His feast day is February 12th.