Saint Thomas was called to be one of the twelve Apostles. He was a dedicated but impetuous follower of Christ. When Jesus said He was returning to Judea to visit His sick friend Lazarus, Thomas immediately exhorted the other Apostles to accompany Him on the trip which involved certain danger and possible death because of the mounting hostility of the authorities.

At the Last Supper, when Christ told His Apostles that He was going to prepare a place for them to which they also might come because they knew both the place and the way, Thomas pleaded that they did not understand and received the beautiful assurance that Christ is the Way, the Truth, and the Life.

But St. Thomas is best known for his role in verifying the Resurrection of his Master. Thomas’ unwillingness to believe that the other Apostles had seen their risen Lord on the first EasterSunday merited for him the title of “doubting Thomas.” Eight days later, on Christ’s second apparition, Thomas was gently rebuked for his scepticism and furnished with the evidence he had demanded – seeing in Christ’s hands the point of the nails and putting his fingers in the place of the nails and his hand into His side. At this, St. Thomas became convinced of the truth of the Resurrection and exclaimed: “My Lord and My God,” thus making a public Profession of Faith in the Divinity of Jesus.

St. Thomas is also mentioned as being present at another Resurrection appearance of Jesus – at Lake Tiberias when a miraculous catch of fish occurred. This is all that we know about St. Thomas from the New Testament.

Tradition says that at the dispersal of the Apostles after Pentecost this saint was sent to evangelize the Parthians, Medes, and Persians; he ultimately reached India, carrying the Faith to the Malabar coast, which still boasts a large native population calling themselves “Christians of St. Thomas.” He capped his left by shedding his blood for his Master, speared to death at a place called Calamine. His feast day is July 3rd and he is the patron of architects. 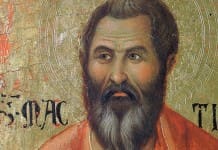