Zachary was a priest in Jerusalem. He was told by an angel in a vision that he and his wife Elizabeth would have a son and should name him John. When he doubted this, he was struck dumb. After John’s birth, Zachary’s speech was restored. An unverifiable tradition has Zachary murdered in the Temple when he refused to tell Herod where his son John was to be found.

The name Elizabeth, which has been borne by several saints, means in Hebrew “worshiper of God.” All that we know of Elizabeth, wife of Zachary and mother of John the Baptist, is to be found in the book of Luke. A descendant of the priestly line of Aaron, she was a kinswoman—how close we are not told—of the Virgin Mary.

According to the Gospel, Elizabeth had lived a blameless life with her husband in one of the hill-towns of Judea. Having reached an advanced age with her prayers for a son unanswered, she thought that her barrenness was a reproach. One day, while Zachary was serving in the temple, the Angel Gabriel appeared at the right of the altar, and announced that a son would be born to Elizabeth.

It was in the sixth month of her pregnancy that the Virgin Mary came to visit her—a touching and beautiful scene pictured by many great artists. The Angel Gabriel, having lately announced to Mary the destiny that awaited her, also told her that her kinswoman Elizabeth was with child.

The Virgin Mary, eager to share in Elizabeth’s happiness and to confide that she too would bear a child, traveled down the dusty road from Nazareth. On Mary’s arrival, she was amazed when Elizabeth, having foreseen knowledge, greeted her as “mother of my Lord.”

Elizabeth’s salutation was in these words: “Blessed art thou among women and blessed is the fruit of thy womb. And how have I deserved that the mother of my Lord should come to me? For behold, the moment that the sound of thy greeting came to my ears, the babe in my womb leapt for joy. And blessed is she who has believed, because the things promised her by the Lord shall be accomplished.”

The Gospel story tells us further that at Elizabeth’s delivery her friends and neighbors rejoiced with her, and when the child was brought to be circumcised, they were going to call him after his father Zachary, but his mother said, “His name shall be John.” Solemnity Of The Nativity of John The Baptist 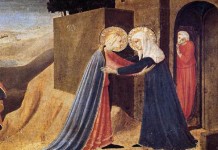 The Feast of the Visitation