The name Padre Pio is abuzz in Catholic culture right now with Shia Labeouf set to play him an upcoming movie, and rightfully so.

A legendary mystic and stigmatic, above all Padre Pio was a great saint. Padre Pio was distinctly known for his devout prayer life, calling it the best weapon we possess, the key that opens the heart of God.

In fact, he said this prayer every single day of his life that he called a “secret weapon.”

How much do you really know about the life of Padre Pio?

Read on for a short bio from the Last Mass of Saint Pio of Pietrelcina, which you can watch here, and see what you learn!

He experienced a wide variety of supernatural abilities and miraculous events including: the reading of souls; prophecy; bilocation (being in two places at once); the odor of sanctity; discernment of spirits; living on very little sleep; miraculous healings; personal visits from Jesus and Mary; and daily communication with his guardian angel.

Padre Pio’s most famous spiritual gift is the stigmata, which he received in 1918 while praying before a crucifix. He is said to have bled from the five wounds of Christ for the rest of his life, which caused him great suffering and embarrassment.

Because of Padre Pio’s great holiness and gifts, the devil is said to have waged war on the friar throughout his life, which included physical attacks resulting in cuts, bruises and other visible marks.

Padre Pio was devoted to all those who sought his help, but he was especially devoted to the souls in purgatory. He once said, “More souls of the dead from purgatory, than of the living, climb this mountain to attend my Masses and seek my prayers.”

If you have a devotion to Padre Pio, you’ll love this compilation of rare footage below! 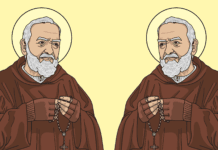