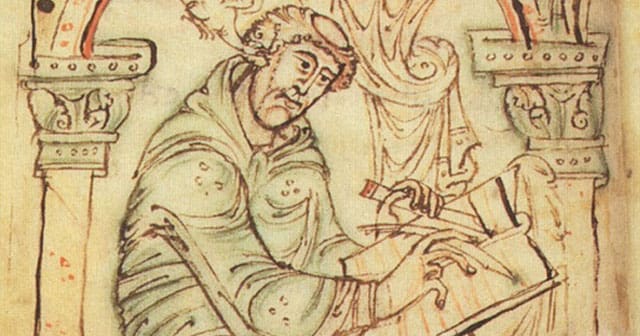 Saint Bede the Venerable was the first great English scholar. He was born in Northumbria (according to tradition, at Monkton, Durham, east of Newcastle) 672 or 673 and died at the monastery of Jarrow on May 25, 735. Almost all that is known of his life is contained in a notice added by himself to his great work Historia ecclesiastica (v, 24), which states that he was placed in the monastery at Wearmouth at the age of seven, that he became deacon in his nineteenth year, and priest in his thirtieth.

He was trained by the abbots Benedict Biscop and Ceolfrid, and probably accompanied the latter to Jarrow in 682. There he spent his life, finding his chief pleasure in being always occupied in learning, teaching, or writing, and zealous in the performance of monastic duties.

His works show that he had at his command all the learning of his time. He was proficient in patristic literature, and quotes from Puny the Younger, Vergil, Lucretius, Ovid, Horace, and other classical writers, but with some disapproval. He knew Greek and a little Hebrew. His Latin is clear and without affectation, and he is a skilful story-teller.

His works were so widely spread throughout Europe and so much esteemed that he won the name of “the teacher of the Middle Ages.”

Bede became known as Venerable Bede soon after his death, but this was not linked to consideration for sainthood by the Roman Catholic Church. His scholarship and importance to Catholicism were recognized in 1899 when he was declared a Doctor of the Church.