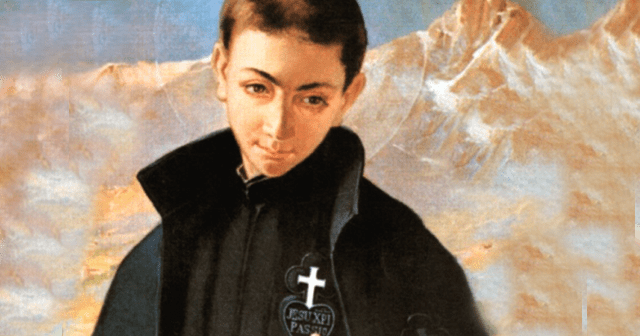 Born in Italy into a large family and baptized Francis, he lost his mother when he was only four years old. He was educated by the Jesuits and, having been cured twice of serious illnesses, came to believe that God was calling him to the religious life. Young Francis wished to join the Jesuits but was turned down, probably because of his age, not yet 17.

Following the death of a sister to cholera, his resolve to enter religious life became even stronger and he was accepted by the Passionists. Upon entering the novitiate he was given the name Gabriel of Our Lady of Sorrows. Ever popular and cheerful, Gabriel quickly was successful in his effort to be faithful in little things. His spirit of prayer, love for the poor, consideration of the feelings of others, exact observance of the Passionist Rule as well as his bodily penances—always subject to the will of his wise superiors— made a deep impression on everyone.

His superiors had great expectations of Gabriel as he prepared for the priesthood, but after only four years of religious life symptoms of tuberculosis appeared. Ever obedient, he patiently bore the painful effects of the disease and the restrictions it required, seeking no special notice. He died peacefully on February 27, 1862, at age 24, having been an example to both young and old. Gabriel of Our Lady of Sorrows was canonized in 1920. Saint Paul of the Cross