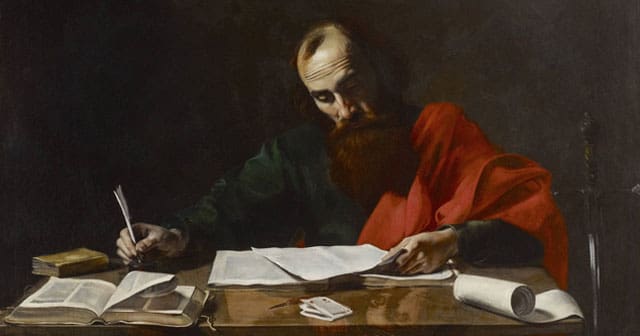 Saint Paul, the indefatigable Apostle of the Gentiles, was converted from Judaism on the road to Damascus. He remained some days in Damascus after his Baptism, and then went to Arabia, possibly for a year or two to prepare himself for his future missionary activity. Having returned to Damascus, he stayed there for a time, preaching in the synagogues that Jesus is the Christ, the Son of God. For this he incurred the hatred of the Jews and had to flee from the city. He then went to Jerusalem to see Peter and pay his homage to the head of the Church.

Later he went back to his native Tarsus, where he began to evangelize his own province until called by Barnabus to Antioch. After one year, on the occasion of a famine, both Barnabus and Paul were sent with alms to the poor Christian community at Jerusalem. Having fulfilled their mission they returned to Antioch.

Soon after this, Paul and Barnabus made the first missionary journey, visiting the island of Cypress, then Pamphylia, Pisidia, and Lycaonia, all in Asia Minor, and establishing churches at Pisidian Antioch, Iconium, Lystra, and Derbe.

After the Apostolic Council of Jerusalem Paul, accompanied by Silas and later also by Timothy and Luke, made his second missionary journey, first revisiting the churches previously established by him in Asia Minor, and then passing through Galatia. At Troas a vision of a Macedonian was had by Paul, which impressed him as a call from God to evangelize in Macedonia. He accordingly sailed for Europe, and preached the Gospel in Philippi. Thessalonica, Beroea, Athens, and Corinth. Then he returned to Antioch by way of Ephesus and Jerusalem.

On his third missionary journey, Paul visited nearly the same regions as on the second trip, but made Ephesus where he remained nearly three years, the center of his missionary activity. He laid plans also for another missionary journey, intending to leave Jerusalem for Rome and Spain. Persecutions by the Jews hindered him from accomplishing his purpose. After two years of imprisonment at Caesarea he finally reached Rome, where he was kept another two years in chains.

The Acts of the Apostles gives us no further information on the life of the Apostle. We gather, however, from the Pastoral Epistles and from tradition that at the end of the two years St. Paul was released from his Roman imprisonment, and then traveled to Spain, later to the East again, and then back to Rome, where he was imprisoned a second time and in the year 67, was beheaded.

St. Paul untiring interest in and paternal affection for the churches established by him have given us fourteen canonical Epistles. It is, however, quite certain that he wrote other letters which are no longer extant. In his Epistles, St. Paul shows himself to be a profound religious thinker and he has had an enduring formative influence in the development of Christianity. The centuries only make more apparent his greatness of mind and spirit. His feast day is June 29th.