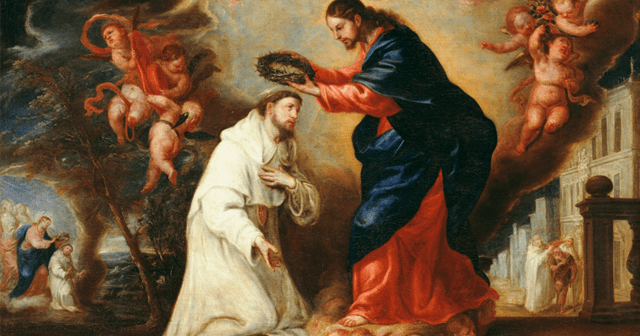 Saint Raymond was born at Portella, Catalonia, Spain. He was delivered by caesarean operation when his mother died in childbirth. Hence his name non natus (not born). He joined the Mercedarians under St. Peter Nolasco at Barcelona. He succeeded Peter as chief ransomer and went to Algeria to ransom slaves.

He remained as hostage for several slaves when his money ran out and was sentenced to be impaled when the governor learned that he had converted several Mohammedans. He escaped the death sentence because of the ransom he would bring, but was forced to run the gauntlet. He was then tortured for continuing his evangelizing activities but was ransomed eight months later by Peter Nolasco. On his return to Barcelona in 1239, he was appointed Cardinal by Pope Gregory IX, but died at Cardona a short distance from Barcelona the next year while on the way to Rome.

According to tradition, the local count, the friars and the town all claimed his body. To resolve this dispute, the body was placed on a blind mule, which was let loose. Unguided, it went to the nearby country chapel where he had prayed in his youth. It was there that he was buried. Many miracles were attributed to him before and after his death.

He was canonized in 1657. He is the patron saint of expectant mothers and midwives because of the nature of his own birth. Although his mother died in labor, Raymond miraculously survived the ordeal. His feast day is August 31.