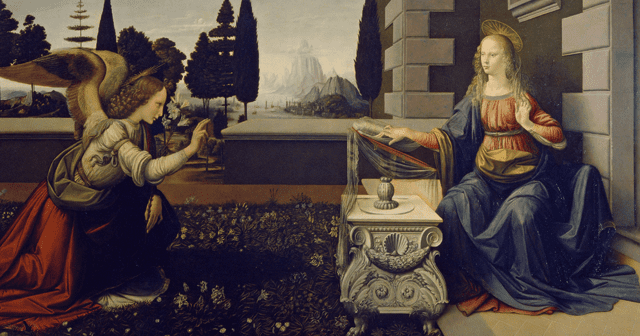 Solemnity Of The Annunciation of The Lord, also called in old calendars: FESTUM INCARNATIONIS, INITIUM REDEMPTIONIS CONCEPTIO CHRISTI, ANNUNTIATIO CHRISTI, ANNUNTIATIO DOMINICA and The Feast of the Annunciation of the Blessed Virgin Mary. In the East, where the part which Mary took in the Redemption is celebrated by a special feast, 26 December, the Annunciation is a feast of Christ; in the Latin Church, it is a feast of Mary. It probably originated shortly before or after the council of Ephesus (c. 431). At the time of the Synod of Laodicea (372) it was not known; St. Proclus, Bishop of Constantinople (d. 446), however, seems to mention it in one of his homilies. He says, that the feast of the coming of Our Lord and Saviour, when He vested Himself with the nature of man (quo hominum genus indutus), was celebrated during the entire fifth century. This homily, however, may not be genuine, or the words may be understood of the feast of Christmas.

In the Latin Church this feast is first mentioned in the Sacramentarium of Pope Gelasius (d. 496), which we possess in a manuscript of the seventh century; it is also contained in the Sacramentarium of St. Gregory (d. 604), one manuscript of which dates back to the eighth century. Since these sacramentaries contain additions posterior to the time of Gelasius and Gregory, Duchesne (Origines du culte chrétien, 118, 261) ascribes the origin of this feast in Rome to the seventh century; Probst, however, (Sacramentarien, 264) thinks that it really belongs to the time of Pope Gelasius. The tenth Synod of Toledo (656), and Trullan Synod (692) speak of this feast as one universally celebrated in the Catholic Church.

All Christian antiquity (against all astronomical possibility) recognized the 25th of March as the actual day of Our Lord’s death. The opinion that the Incarnation also took place on that date is found in the pseudo-Cyprianic work “De Pascha Computus”, c. 240. It argues that the coming of Our Lord and His death must have coincided with the creation and fall of Adam. And since the world was created in spring, the Saviour was also conceived and died shortly after the equinox of spring. Similar fanciful calculations are found in the early and later Middle Ages, and to them, no doubt, the dates of the feast of the Annunciation and of Christmas owe their origin. Consequently the ancient martyrologies assign to the 25th of March the creation of Adam and the crucifixion of Our Lord; also, the fall of Lucifer, the passing of Israel through the Red Sea and the immolation of Isaac. (Thruston, Christmas and the Christian Calendar, Amer. Eccl. Rev., XIX, 568.) The original date of this feast was the 25th of March. Although in olden times most of the churches kept no feast in Lent, the Greek Church in the Trullan Synod (in 692; can. 52) made an exception in favour of the Annunciation. In Rome, it was always celebrated on the 25th of March. The Spanish Church transferred it to the 18th of December, and when some tried to introduce the Roman observance of it on the 25th of March, the 18th of December was officially confirmed in the whole Spanish Church by the tenth Synod of Toledo (656). This law was abolished when the Roman liturgy was accepted in Spain.

The church of Milan, up to our times, assigns the office of this feast to the last Sunday in Advent. On the 25th of March a Mass is sung in honour of the Annunciation. (Ordo Ambrosianus, 1906; Magistretti, Beroldus, 136.) The schismatic Armenians now celebrate this feast on the 7th of April. Since Epiphany for them is the feast of the birth of Christ, the Armenian Church formerly assigned the Annunciation to 5 January, the vigil of Epiphany. This feast was always a holy day of obligation in the Universal Church. As such it was abrogated first for France and the French dependencies, 9 April, 1802; and for the United States, by the Third Council of Baltimore, in 1884. By a decree of the S.R.C., 23 April, 1895, the rank of the feast was raised from a double of the second class to a double of the first class. If this feast falls within Holy Week or Easter Week, its office is transferred to the Monday after the octave of Easter. In some German churches it was the custom to keep its office the Saturday before Palm Sunday if the 25th of March fell in Holy Week. The Greek Church, when the 25th of March occurs on one of the three last days in Holy Week, transfers the Annunciation to Easter Monday; on all other days, even on Easter Sunday, its office is kept together with the office of the day. Although no octaves are permitted in Lent, the Dioceses of Loreto and of the Province of Venice, the Carmelites, Dominicans, Servites, and Redemptorists, celebrate this feast with an octave. 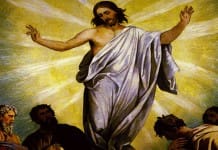