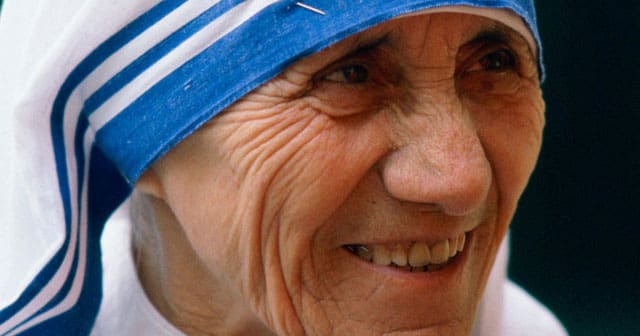 Small of stature, rocklike in faith, Mother Teresa of Calcutta was entrusted with the mission of proclaiming God’s thirsting love for humanity, especially for the poorest of the poor. “God still loves the world and He sends you and me to be His love and His compassion to the poor.” She was a soul filled with the light of Christ, on fire with love for Him and burning with one desire: “to quench His thirst for love and for souls.”

This luminous messenger of God’s love was born on 26 August 1910 in Skopje, a city situated at the crossroads of Balkan history. The youngest of the children born to Nikola and Drane Bojaxhiu, she was baptised Gonxha Agnes, received her First Communion at the age of five and a half and was confirmed in November 1916. From the day of her First Holy Communion, a love for souls was within her. Her father’s sudden death when Gonxha was about eight years old left in the family in financial straits. Drane raised her children firmly and lovingly, greatly influencing her daughter’s character and vocation. Gonxha’s religious formation was further assisted by the vibrant Jesuit parish of the Sacred Heart in which she was much involved.

At the age of eighteen, moved by a desire to become a missionary, Gonxha left her home in September 1928 to join the Institute of the Blessed Virgin Mary, known as the Sisters of Loreto, in Ireland. There she received the name Sister Mary Teresa after St. Thérèse of Lisieux. In December, she departed for India, arriving in Calcutta on 6 January 1929. After making her First Profession of Vows in May 1931, Sister Teresa was assigned to the Loreto Entally community in Calcutta and taught at St. Mary’s School for girls. On 24 May 1937, Sister Teresa made her Final Profession of Vows, becoming, as she said, the “spouse of Jesus” for “all eternity.” From that time on she was called Mother Teresa. She continued teaching at St. Mary’s and in 1944 became the school’s principal. A person of profound prayer and deep love for her religious sisters and her students, Mother Teresa’s twenty years in Loreto were filled with profound happiness. Noted for her charity, unselfishness and courage, her capacity for hard work and a natural talent for organization, she lived out her consecration to Jesus, in the midst of her companions, with fidelity and joy.

On 10 September 1946 during the train ride from Calcutta to Darjeeling for her annual retreat, Mother Teresa received her “inspiration,” her “call within a call.” On that day, in a way she would never explain, Jesus’ thirst for love and for souls took hold of her heart and the desire to satiate His thirst became the driving force of her life. Over the course of the next weeks and months, by means of interior locutions and visions, Jesus revealed to her the desire of His heart for “victims of love” who would “radiate His love on souls.” “Come be My light,” He begged her. “I cannot go alone.” He revealed His pain at the neglect of the poor, His sorrow at their ignorance of Him and His longing for their love. He asked Mother Teresa to establish a religious community, Missionaries of Charity, dedicated to the service of the poorest of the poor. Nearly two years of testing and discernment passed before Mother Teresa received permission to begin. On August 17, 1948, she dressed for the first time in a white, blue-bordered sari and passed through the gates of her beloved Loreto convent to enter the world of the poor.

After a short course with the Medical Mission Sisters in Patna, Mother Teresa returned to Calcutta and found temporary lodging with the Little Sisters of the Poor. On 21 December she went for the first time to the slums. She visited families, washed the sores of some children, cared for an old man lying sick on the road and nursed a woman dying of hunger and TB. She started each day in communion with Jesus in the Eucharist and then went out, rosary in her hand, to find and serve Him in “the unwanted, the unloved, the uncared for.” After some months, she was joined, one by one, by her former students.

On 7 October 1950 the new congregation of the Missionaries of Charity was officially established in the Archdiocese of Calcutta. By the early 1960s, Mother Teresa began to send her Sisters to other parts of India. The Decree of Praise granted to the Congregation by Pope Paul VI in February 1965 encouraged her to open a house in Venezuela. It was soon followed by foundations in Rome and Tanzania and, eventually, on every continent. Starting in 1980 and continuing through the 1990s, Mother Teresa opened houses in almost all of the communist countries, including the former Soviet Union, Albania and Cuba.

In order to respond better to both the physical and spiritual needs of the poor, Mother Teresa founded the Missionaries of Charity Brothers in 1963, in 1976 the contemplative branch of the Sisters, in 1979 the Contemplative Brothers, and in 1984 the Missionaries of Charity Fathers. Yet her inspiration was not limited to those with religious vocations. She formed the Co-Workers of Mother Teresa and the Sick and Suffering Co-Workers, people of many faiths and nationalities with whom she shared her spirit of prayer, simplicity, sacrifice and her apostolate of humble works of love. This spirit later inspired the Lay Missionaries of Charity. In answer to the requests of many priests, in 1981 Mother Teresa also began the Corpus Christi Movement for Priests as a “little way of holiness” for those who desire to share in her charism and spirit.

During the years of rapid growth the world began to turn its eyes towards Mother Teresa and the work she had started. Numerous awards, beginning with the Indian Padmashri Award in 1962 and notably the Nobel Peace Prize in 1979, honoured her work, while an increasingly interested media began to follow her activities. She received both prizes and attention “for the glory of God and in the name of the poor.”

The whole of Mother Teresa’s life and labour bore witness to the joy of loving, the greatness and dignity of every human person, the value of little things done faithfully and with love, and the surpassing worth of friendship with God. But there was another heroic side of this great woman that was revealed only after her death. Hidden from all eyes, hidden even from those closest to her, was her interior life marked by an experience of a deep, painful and abiding feeling of being separated from God, even rejected by Him, along with an ever-increasing longing for His love. She called her inner experience, “the darkness.”  The “painful night” of her soul, which began around the time she started her work for the poor and continued to the end of her life, led Mother Teresa to an ever more profound union with God. Through the darkness she mystically participated in the thirst of Jesus, in His painful and burning longing for love, and she shared in the interior desolation of the poor.

During the last years of her life, despite increasingly severe health problems, Mother Teresa continued to govern her Society and respond to the needs of the poor and the Church. By 1997, Mother Teresa’s Sisters numbered nearly 4,000 members and were established in 610 foundations in 123 countries of the world. In March 1997 she blessed her newly-elected successor as Superior General of the Missionaries of Charity and then made one more trip abroad. After meeting Pope John Paul II for the last time, she returned to Calcutta and spent her final weeks receiving visitors and instructing her Sisters. On 5 September Mother Teresa’s earthly life came to an end. She was given the honour of a state funeral by the Government of India and her body was buried in the Mother House of the Missionaries of Charity. Her tomb quickly became a place of pilgrimage and prayer for people of all faiths, rich and poor alike. Mother Teresa left a testament of unshakable faith, invincible hope and extraordinary charity. Her response to Jesus’ plea, “Come be My light,” made her a Missionary of Charity, a “mother to the poor,” a symbol of compassion to the world, and a living witness to the thirsting love of God.

On December 12, 1998, Pope John Paul II granted a dispensation from the norm, and the inquiry for Mother Teresa was able to begin in the Archdiocese of Calcutta. The closing session of the diocesan inquiry was held on Aug. 15, 2001. The Acts of the Diocesan Inquiry consist of 80 volumes, each approximately 450 pages. This material was subsequently submitted to the Congregation for the Saints in Rome. So, even though an exemption was made for the period of waiting, no exemption was made from the formal process itself or from any of its steps.

On December 20, 2002, the decree of the miracle attributed to Mother Teresa (Monika Besra’s cure) was made public. So, only five years and three months after her death (on September 5, 1997), her beatification was announced, which is unprecedented in the history of the Church. Usually, the Church’s norms require a waiting period of five years after death before a Diocese can begin an inquiry into the life of the would-be saint.

On October 19, 2003, World Mission Sunday, a visibly moved John Paul II beatified Mother Teresa of Calcutta, the founder of the Missionaries of Charity, “whom I have always felt close to me,” before a crowd of 300,000 overflowing St. Peter’s Square, adding that she was “one of the most important figures of our time, one of the greatest missionaries of the 20th century.” More than 100 cardinals and numerous bishops accompanied the Pope as he beatified the world-famous servant of the poorest of the poor. The Holy Father established September 5 as Mother Teresa’s feast day — “the day of her birth in heaven.”

Some 500 Missionaries of Charity in their white-and-blue saris attended the ceremony, where the front rows were reserved for 3,500 poor. Also present were representatives of the Orthodox Church and two Muslim communities from Albania, since Mother Teresa was born to an ethnic Albanian family. Next to Sister Nirmala Joshi, Mother Teresa’s successor and superior general of the Missionaries of Charity, were the heads of other institutes founded by the new blessed. Also present was Monika Besra, the Indian woman inexplicably cured of an abdominal tumor through Mother Teresa’s intercession, who received Holy Communion from the Pope.

“By blood, I am Albanian. By citizenship, an Indian. By faith, I am a Catholic nun. As to my calling, I belong to the world. As to my heart, I belong entirely to the Heart of Jesus.” – Bl. Mother Teresa of Calcutta