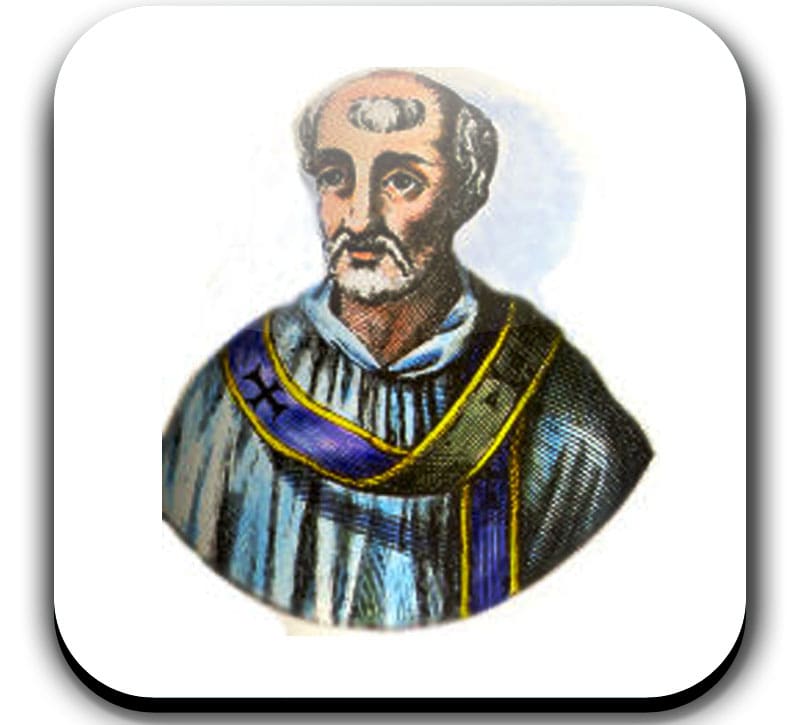 All the ancient records of the Roman bishops which have been handed down to us by St. Irenaeus, Julius Africanus, St. Hippolytus, Eusebius, also the Liberian catalogue of 354, place the name of Linus directly after that of the Prince of the Apostles, St. Peter. These records are traced back to a list of the Roman bishops which existed in the time of Pope Eleutherus (about 174-189), when Irenaeus wrote his book “Adversus haereses”.  This author claims that Pope Linus is the Linus mentioned by St. Paul in his 2 Timothy 4:21.

The passage by Irenaeus (Against Heresies III.3.3) reads: “After the Holy Apostles (Peter and Paul) had founded and set the Church in order (in Rome) they gave over the exercise of the episcopal office to Linus. The same Linus is mentioned by St. Paul in his Epistle to Timothy. His successor was Anacletus.”

We cannot be positive whether this identification of the pope as being the Linus mentioned in 2 Timothy 4:21 goes back to an ancient and reliable source, or originated later on account of the similarity of the name.

Linus’s term of office, according to the papal lists handed down to us, lasted only twelve years. The Liberian Catalogue shows that it lasted twelve years, four months, and twelve days. It cannot be doubted that according to the accounts of Irenaeus concerning the Roman Church in the second century, Linus was chosen to be head of the community of Christians in Rome, after the death of the Apostle. For this reason his pontificate dates from the year of the death of the Apostles Peter and Paul, which, however, is not known for certain.

The “Liber Pontificalis” asserts that Linus’s home was in Tuscany, and that his father’s name was Herculanus; but we cannot discover the origin of this assertion. According to the same work on the popes, Linus is supposed to have issued a decree “in conformity with the ordinance of St. Peter”, that women should have their heads covered in church. Without doubt this decree is apocryphal, and copied by the author of the “Liber Pontificalis” from the first Epistle of St. Paul to the Corinthians (11:5) and arbitrarily attributed to the first successor of the Apostle in Rome.

The statement made in the same source, that Linus suffered martyrdom, cannot be proved and is improbable. For between Nero and Domitian there is no mention of any persecution of the Roman Church; and Irenaeus (1. c., III, iv, 3) from among the early Roman bishops designates only Telesphorus as a glorious martyr.

Finally this book asserts that Linus after his death, was buried in the Vatican beside St. Peter. We do not know whether the author had any decisive reason for this assertion. As St. Peter was certainly buried at the foot of the Vatican Hill, it is quite possible that the earliest bishops of the Roman Church also were interred there. There was nothing in the liturgical tradition of the fourth-century Roman Church to prove this, because it was only at the end of the second century that any special feast of martyrs was instituted and consequently Linus does not appear in the fourth-century lists of the feasts of the Roman saints. The feast of St. Linus is celebrated on 23 September. This is also the date of his death given in the “Liber Pontificalis”.