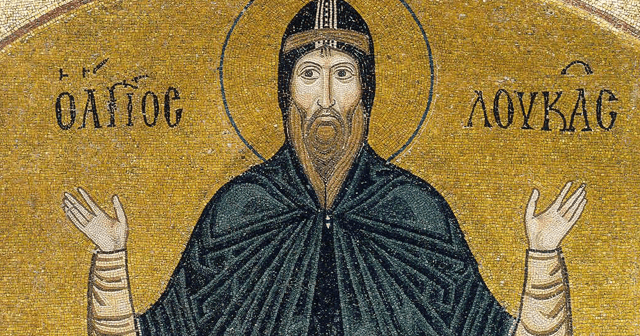 Born on the Greek island of Aegina, Saint Luke the Younger was the son of farmers and the third of seven children. Saracen raiders forced his family to leave their homeland for Thessaly, where St. Luke the Younger worked in the fields and tended sheep. He was a dutiful child, but his charity often frustrated his parents.

St. Luke the Younger frequently gave his own food to those who were hungry and even offered beggars the clothes from his back. When he sowed seeds in his family’s fields, he sometimes scattered half in the neighboring fields of the poor. His family’s crops flourished, but his parents still did not approve. After his father’s death, young Luke decided to become a hermit. The decision angered his mother, who was hoping for a more traditional secular life for her son. He left home to find a monastery.

St. Luke the Younger was captured by tribesmen who mistook him for a runaway slave. He was imprisoned for a time, and then returned home, where he was ridiculed for running away. Later, two monks on their way to the Holy Land persuaded Luke’s mother to allow him to join a monastery in Athens. St. Luke the Younger had hardly arrived before his superior sent him home, claiming that his mother had appeared in a vision calling for his help.

Eventually, St. Luke the Younger’s mother understood her son’s call to religious life and no longer opposed him. Luke built his hermitage on Mount Joannitsa, near Corinth. His reputation for holiness, and his numerous miracles inspired people to call him , meaning “miracle worker.” St. Luke the Younger became so popular that after his death his cell was turned into an oratory.