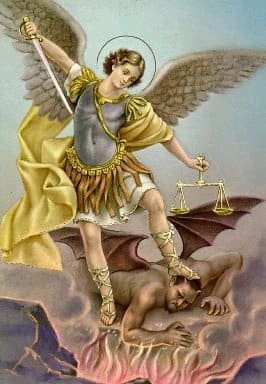 St. Michael, whom the Church honors this day, is the prince of the faithful angels who opposed Lucifer and his associates in their revolt against God.

The name Michael comes from the Hebrew phrase “Mikha’ el” meaning “Who is like God?”, which is said to have been the battle-cry of the Angels of heaven against the rebellious angels of Lucifer.  In the new Testament, Michael is described as the first of the chief princes or archangels who is supposed to be the guardian angel of the Israelites. Police officers and soldiers, particularly paratroopers and fighter pilots, regard him as their patron.

As the devil is the sworn enemy of God’s holy Church, St. Michael is its special protector against his assaults and stratagems. This holy archangel has ever been honored in the Christian Church as her guardian under God, and as the protector of the faithful; for God is pleased to employ the zeal and charity of the good angels and their leader against the malice of the devil. To thank His adorable goodness for this benefit of His merciful providence is this festival instituted by the Church in honor of the good angels, in which devotion she has been encouraged by several apparitions of this glorious archangel.

The feast of the Apparition of Saint Michael commemorates the appearance of the archangel to a man named Gargan in 492 on Mount Gargano near Manfredonia in southern Italy. Gargan and others were pasturing cattle on the mountain; a bull wandered off and hid in a cave. An arrow was shot into the cave, but it came flying back out and wounded the archer. The cowherds went to their bishop who ordered three days of fasting and prayer to seek an explanation for the mystery. At the end of the three days Michael appeared to the bishop and requested a church built in the honour of the Holy Angels in the cave. If you find medals or holy cards with ‘relics‘ of Michael, they are probably rock chips from the cave, or pieces of cloth that have touched it.

St. Michael is not only the protector of the Church, but of every faithful soul. He defeated the devil by humility: we are enlisted in the same warfare. His arms were humility and ardent love of God: the same must be our weapons. We ought to regard this archangel as our leader under God: and, courageously resisting the devil in all his assaults, to cry out, Who is like God?