According to the Gospels of Mark, Matthew, and Luke, a great darkness struck the land from noon until three and the earth quaked splitting rock in twain when Christ was Crucified.

“From noon onward, darkness came over the whole land until three in the afternoon. And behold, the veil of the sanctuary was torn in two from top to bottom. The earth quaked, rocks were split” – Matthew 27:45,51

Today, some authors and historians dismiss this record of events as simply imaginative fiction. What secular evidence do we have for darkness and an earthquake taking place at the Crucifixion?

Thallus was earliest secular writer to mention Jesus; in fact, he is so ancient his complete volume of works does not even exist anymore. Writing not even twenty years after the Crucifixion, he is quoted by Julius Africanus around 221 A.D. as trying to provide an explanation for the darkness that occurred at the Crucifixion.

“On the whole world there pressed a most fearful darkness; and the rocks were rent by an earthquake, and many places in Judea and other districts were thrown down. This darkness Thallus, in the third book of his History, calls, as appears to me without reason, an eclipse of the sun.” – (Julius Africanus, Chronography, 18:1)

Thallus attempted to explain the darkness at the Crucifixion away as simply an eclipse. A reasonable explanation, except that a solar eclipse can last at most seven minutes, not a full three hours as recorded in the gospels. Even more evidence the darkness was not simply a natural phenomenon, a solar eclipse can only take place at the new moon, however Christ was crucified during Passover which takes place during the full moon.

Even more conclusive non-Biblical evidence comes from Phlegon, who wrote an extensive chronology around the year 137 A.D. In his writing, he confirms the year of the Crucifixion darkness, and records that an earthquake took place.

“In the fourth year of the 202nd Olympiad [33 A.D.] there was ‘the greatest eclipse of the sun’ and that ‘it became night in the sixth hour of the day [noon] so that stars even appeared in the heavens. There was a great earthquake in Bithynia, and many things were overturned in Nicaea.'”

In a study conducted by secular geologists of an outcropping on the southwestern shore of the Dead Sea, a distinctive mixed sediment layer was linked to the Qumran earthquake of 31 B.C. 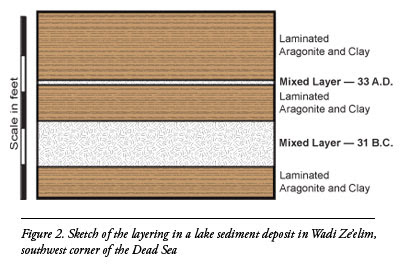 About a foot above the layer is a narrow band of another mixed sediment layer. Using sedimentation rates, the study determined the thin layer was placed about 65 years after the first, in the year 33 A.D.

This thin layer was determined to be caused by a prominent seismic event between the years 26 A.D. – 36 A.D., causing rocks to combine and form the thin mixed layer. According to the geological evidence, the earthquake that occurred at the Crucifixion was a real historical event. The Flower of the Five Wounds: How Jesuits Named the Passionflower After Christ’s Crucifixion Why Did Jesus Say “Why Have You Abandoned Me?”