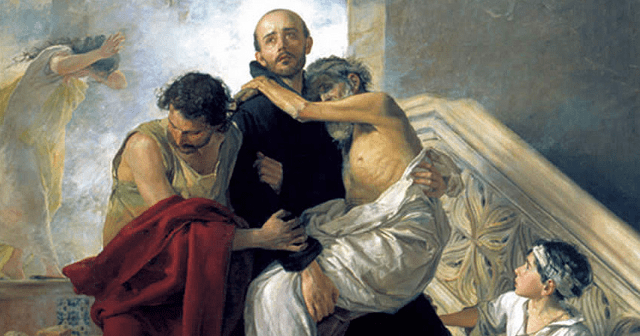 Saint John of God (1495-1550) having given up active Christian belief while a soldier, was 40 before the depth of his sinfulness began to dawn on him. He decided to give the rest of his life to God’s service, and headed at once for Africa, where he hoped to free captive Christians and, possibly, be martyred.

He was soon advised that his desire for martyrdom was not spiritually well based, and returned to Spain and the relatively prosaic activity of a religious goods store. Yet he was still not settled. Moved initially by a sermon of Blessed John of Avila, he one day engaged in a public beating of himself, begging mercy and wildly repenting for his past life.   Committed to a mental hospital for these actions, John was visited by Blessed John, who advised him to be more actively involved in tending to the needs of others rather than in enduring personal hardships. John gained peace of heart, and shortly after left the hospital to begin work among the poor.

He established a house where he wisely tended to the needs of the sick poor, at first doing his own begging. But excited by the saint’s great work and inspired by his devotion, many people began to back him up with money and provisions. Among them were the archbishop and marquis of Tarifa.

Behind John’s outward acts of total concern and love for Christ’s sick poor was a deep interior prayer life which was reflected in his spirit of humility. These qualities attracted helpers who, 20 years after John’s death, formed the Brothers Hospitallers, now a worldwide religious order.   One mark of honor to his labors is that this order has been officially entrusted with the medical care of the Popes.

John became ill after 10 years of service but tried to disguise his ill health. He began to put the hospital’s administrative work into order and appointed a leader for his helpers. He died on March 8, 1550, his 55th birthday. He was canonized by Pope Alexander VIII on October 16, 1690, and later named the patron saint of hospitals, the sick, nurses, firefighters, alcoholics, and booksellers. St. John’s feast day is commemorated on March 8.