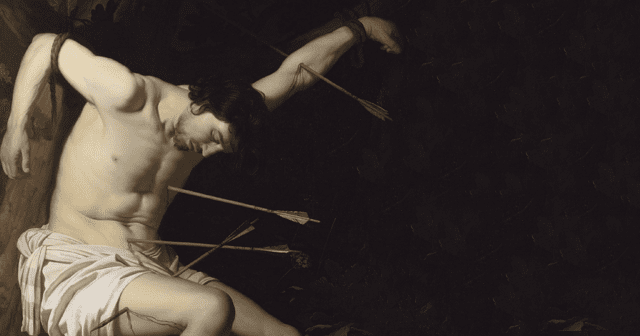 According to his legend, Sebastian was born at Narbonne, Gaul. He became a soldier in the Roman army at Rome in about 283, and encouraged Marcellian and Marcus, under sentence of death, to remain firm in their faith.

Sebastian made numerous converts: among them were the master of the rolls, Nicostratus, who was in charge of prisoners and his wife, Zoe, a deaf mute whom he cured; the jailer Claudius; Chromatius, Prefect of Rome, whom he cured of gout; and Chromatius’ son, Tiburtius. Chromatius set the prisoners free, freed his slaves, and resigned as prefect.

He was shot with arrows and left for dead, but when the widow of St. Castulus went to recover his body, she found he was still alive and nursed him back to health. Soon after, Sebastian intercepted the Emperor, denounced him for his cruelty to Christians, and was beaten to death on the Emperor’s orders.

Saint Sebastian was venerated at Milan as early as the time of St. Ambrose and was buried on the Appian Way. He is patron of archers, athletes, and soldiers, and is appealed to for protection against plagues.

He is patron saint of athletes because of his physical endurance and his energetic way of spreading and defending the Faith. Sebastian is also patron to all soldiers. He entered the Roman army under Emperor Carinus in 283 in order to defend the confessors and martyrs of his day without drawing attention to himself.

His efforts kept the Faith of Marcus and Marcellian firm during their persecutions, right up to the time of their martyrdom. He was declared patron of plague sufferers of his reported cures of those afflicted with many diseases.

This Saint Survived Being Shot to Death by Arrows