So when Ed & Lorraine Warren were unable to exorcise a succubus during the Smurl haunting – what they called the most tenacious haunting they’ve ever encountered – they enlisted none other than the help of at-the-time Cardinal Ratzinger.

Ratzinger forwarded the case directly to the Holy See in Rome who then assigned an exorcist from the Vatican, who came to Pennsylvania and performed the Rite of Exorcism on the Smurl home. 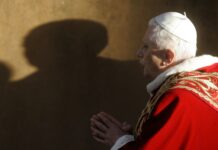