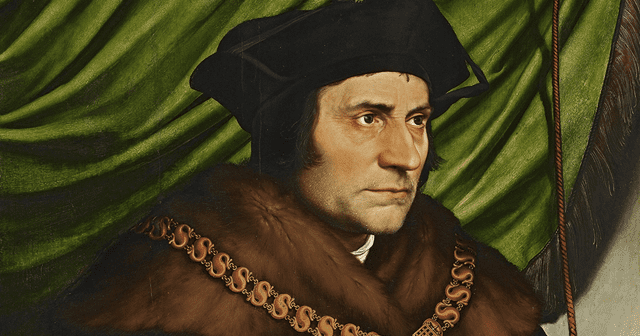 During his early manhood, he wrote comedies and spent much time in the study of Greek and Latin literature. One of his first works was a translation of a biography of Pico della Mirandola (1463-1494); he became a close friend with Desiderius Erasmus (ca. 1466-1536) and he, like them, became a great humanist.

More’s sense of obligation to active citizenship and statesmanship finally won out over his monastic inclinations.  He entered the parliament in 1504. In 1510, he was appointed undersheriff of London.

During the next decade, More attracted the attention of King Henry VIII, and served frequently on diplomatic missions to the Low Countries. In 1518 he became a member of the Privy Council; he was knighted in 1521.

He refused to endorse King Henry VIII’s plan to divorce Catherine of Aragon (1527) and marry Ann Boleyn. Nevertheless, after the fall of Thomas Wolsey in 1529, More became Lord Chancellor of England. He was the first layman to hold the post. His work in the law courts was exemplary, but he resigned in 1532, citing ill health and probably feeling that he could not in conscience serve a government that was interfering with the church.

Two years later he was imprisoned in the Tower of London for refusing to acknowledge Henry as supreme head of the Church of England. He was found guilty of treason, on evidence that was probably perjured.  He was beheaded on July 6, 1535 his last words being “”I die the king’s good servant, but God’s first.” St. Thomas More was canonized in 1935. After Over 450 Years, Catholicism Returns To The Palace Of King Henry VIII Prayer In Defense Of Marriage